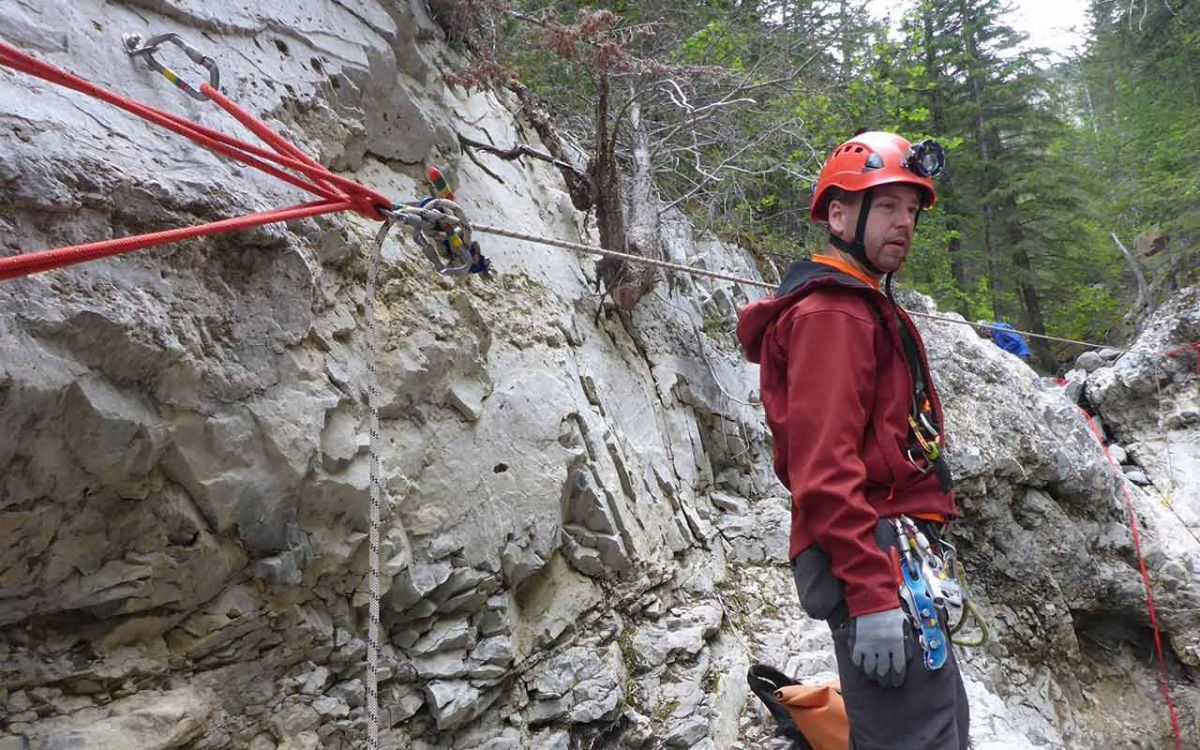 Throughout history, humans have been drawn to explore wild places that no other person has seen before.

For modern-day explorers like Calgary’s Christian Stenner, caving offers one of the final frontiers of discovery on earth.

“That was the first thing that struck me. Here’s this sport where you can go and not only explore, you might actually find something unique,” Stenner says.

Stenner embarked on his first caving experience inside Rat’s Nest Cave with Canmore Cave Tours in 2004, and he’s been hooked ever since – now an office worker by weekday, and passionate cave explorer and rescue coordinator by weekend.

“Some of the places are so remote, you could very well be in a place where no human has ever been, whether it’s exploring a new cave passage, or a lead in a known cave that nobody has ever checked out before. It’s one of the last unexplored frontiers on our planet.”

More Than Just an Adventure

Initially drawn to the world of caving in pursuit of exploration, today Stenner feels the lure of the unknown for more reason than one: discovering unchartered territory, contributing to citizen science, creating bonds with like-minded explorers, and furthering the sport in Canada.

Currently serving as the Provincial Coordinator of Alberta/BC Cave Rescue (a not-for-profit organisation coordinating cave rescue training and response in Western Canada), Stenner values the opportunity to assist speleologists and other experts via his expeditions – whether that’s collecting a specimen, or recording and reporting detailed field observations.

“Exploring in itself is great, we’re finding new cave passages, reaching new depths underground, and going to places where no person has ever been. But to top that off, being able to help with any of the scientific aspects of a caving project is a huge bonus,” he says.

A Portal to Exploration

Stenner recounts a memorable trip in which he did just that – merging the thrill of unchartered territory and scientific interest. And it’s among the highlights of his 12 years of caving.

Joined by two fellow Albertan cavers, Jessie Martin and Nicholaus Vieira, the trio planned a trip to the deepest section of Rat’s Nest Cave in 2008.

“We had gone to what’s called the High Point inside the cave, where there were two 20-metre rappel drops which we had to rig. Then we got to an area called the Pearly Way, where there are some really neat formations and cave pearls. You don’t see those in most places – it’s one of the few caves in Canada to have those kinds of features.” 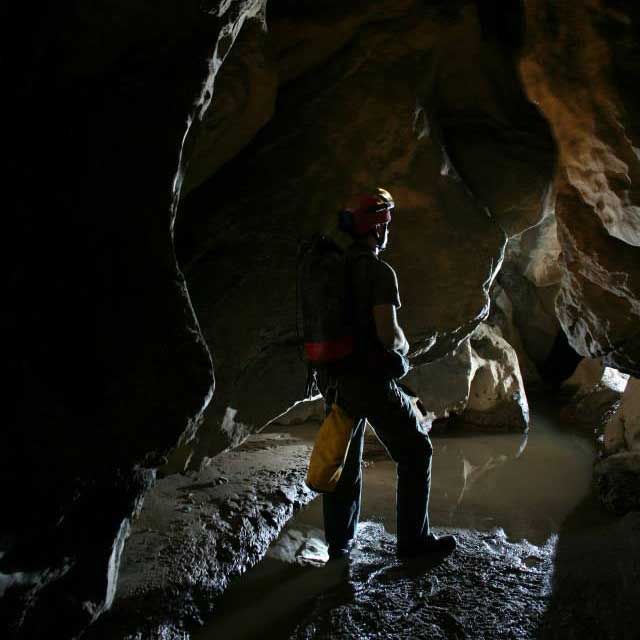 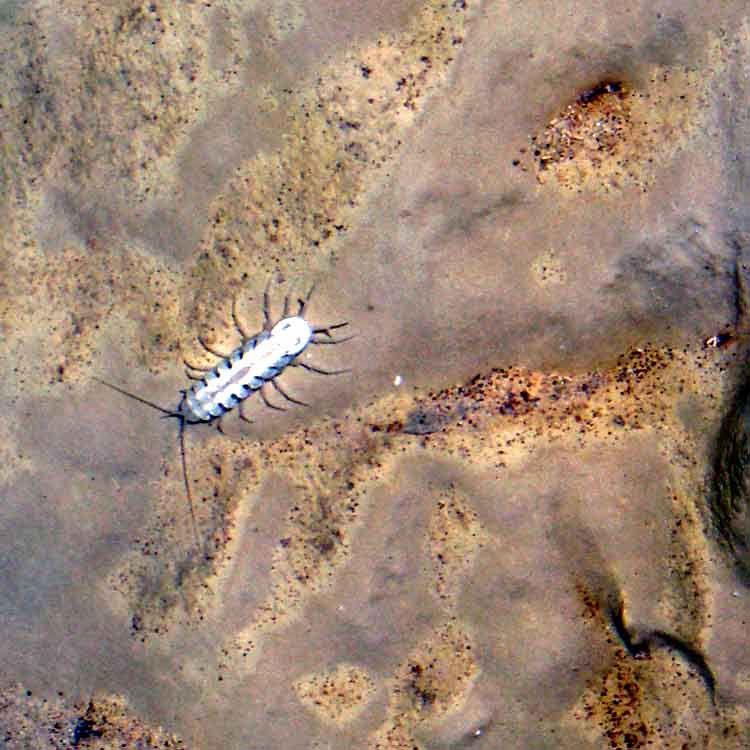 A troglobitic isopod discovered in Rat's Nest Cave, Alberta in 2018

The Thrill of Discovery

“We ended up getting into a sump, which is a flooded section of cave where the water was pooling and reaching all the way to the ceiling. It was in this pool that I looked down, and there were these little white things living in the water,” Stenner says.

The group were a full day’s travel away from the cave’s entrance – almost as deep as it gets.

“We were pretty excited – anything that lives that deep in a cave would have to be pretty unique. We were really hoping it would be a new species, new to science,” Stenner says.

“I had done a lot of reading about Rat’s Nest Cave and knew what had been seen there before. I didn’t remember reading about anything living down there, so this was very interesting to see.”

Back above ground, the trio sent biology experts a photo they had captured of the organism. While scientists confirmed the discovery was likely significant, they needed samples for testing.

So, armed with vials of alcohol, Stenner and his partners returned to recover some specimens.

“It turned out to be an organism that had originally been found in 1975 in the stomachs of trout that had been feeding underwater at a submerged spring,” Stenner says.

“Because of the nature of the organism – no pigmentation and no eyes – it had to come from a cave. We found out that it was an isopod, a type of crustacean.”

While the tests revealed that the species had been discovered before, the group were thrilled to know that it had never been reported in the area.

“We’re an hour outside of Calgary, five minutes outside of Canmore, and next thing we’re discovering a creature which had never been encountered before in that place,” Stenner says.

“Those specimens were sent to the Smithsonian Institution in the United States, where they have thousands of crustaceans from around the world. We were just three people on a trip to see part of the cave that was new to us. It was a neat thing, for a guy like me who works in an office, to have taken part in a discovery like that.”

“That’s an analogy that has been used a lot by cavers – more people have been on the moon than in that place.”

Stenner says his enjoyment of caving is not so much an adrenaline rush, but a sense of calm satisfaction.

“In some sports, moving fast is the excitement. With caving, we’re still working and tying ropes when we’re busy exploring – so if you’re moving fast, it’s probably a bad sign,” he says.

“With that discovery, what I remember was the drive home. I was alone in my truck and this feeling of elation hit me. The gravity of what we’d done sank in – going to a new place no one else had ever seen before. It’s a neat feeling, and I can’t really replicate it doing anything else.”

When you discover something new and unique, it’s not enough to simply post on a blog or website with a photo – the ethics of caving culture ethics state that you document the results for the benefit of all.

“We need to let the community know what was found, the lengths and depths of the cave, and to show extensions of existing knowledge. All those things need to be recorded – otherwise, how do you know which are the deepest and longest caves? It’s up to us as cavers to create those maps through our exploration,” Stenner says.

“The term that’s used these days is citizen science – offering your own research. When I think about it, cavers have been doing this since the beginning. It’s always been part of being an explorer – that’s your contribution.”

WHAT IS THE ASS CODE OF CONDUCT?

Caving Safety: Individual Responsibilities
Before entering the cave:
Inside the cave:

Before entering the cave:
Inside the cave:
Cave Conservation: Everyone’s Responsibilities for Minimum Impact Caving